This is formed of the legal representatives of the associated Bodies and is chaired by the President of the Regional Council.

This is formed of 5 members appointed as representatives of the Associated Bodies. 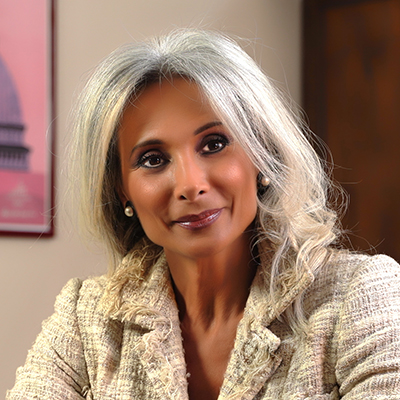 She represents the Consortium for all legal purposes.

Letizia Ferraris was appointed President of CSI Piemonte on 20 December 2019.
She is a lawyer at the Turin Court; her practice deals with civil law, criminal law and tax law.
After obtaining a classical high school diploma and a degree in Law from the University of Turin, she began her university experience at the Chair of Constitutional Law.
Former legal advisor to the San Matteo Foundation "Insieme contro l'usura" (Ministry of the Interior) and other private law foundations, she is currently engaged in the promotion of a business culture also with the conference activity, in particular on the criminal law of the economy and computer crimes.
In addition to her profession, she has worked as an honorary magistrate at the Ivrea Public Prosecutor's Office; she has obtained professional certificates in specialised subjects, in consumer law, in bankruptcy and debit procedures and in anti-discrimination law; she was appointed by the Piedmont Region as an expert member of CORESA - Regional Committee for Health and Assistance (1995-2005).
She is an advisor in national and international institutions and brings her professional and personal contribution to numerous charities involved in supporting United Nations humanitarian projects.
Graduated in piano and singing at the Conservatorio G. Verdi in Turin, she cultivates an interest in music by promoting concert activities for emerging talents. Passionate about philosophy, since her early years she studied it at the "International Centre of Rosminian Studies" in Stresa.

This is formed of 14 members appointed by the Assembly, half proposed by the Universities and half by the ordinary associated Bodies, and completed by the Consortium General Manager. Fulvio Corno has been appointed as President of the Technical and Scientific Committee of CSI Piemonte on 8 October 2019, while he has been a member since 10 April 2018.
After graduating with a Degree in Electronic Engineering and a PhD in IT and System Engineering at the Polytechnics of Turin, he continued his academic career in the Department of Automation and IT of the Polytechnics, where he presently works as Full Professor of Information Processing Systems.
He has been teaching Corporate Information Systems, Human Computer Interaction, Programming Techniques and Web Semantics. Since 2018 he is vice-coordinator of the College of IT, Cinema and Mechatronic Engineering. He coordinates the "e-Lite: Intelligent and Interactive Systems" research group, dealing with smart environments, man-machine interaction, Internet of Things and accessibility. He has produced more than 200 publications for magazines and international congresses, and he is a member of the editorial board of IEEE IT Professional and Journal on Reliable Intelligent Environments. He participated in and coordinated many EU and national research projects. He is a member of IEEE, IEEE Computer Society, ACM.

Riccardo Maggiora, a professor at the Polytechnics of Turin, also participates in the proceedings of the Technical and Scientific Committee as an expert on the core themes of our Consortium. He directs the Consortium, and manages the operational activities.

Pietro Pacini has been appointed General Manager of CSI Piemonte on 21st September 2018.
He was born in Tarquinia (Viterbo) in 1963, and graduated in Electronic Engineering at the University "La Sapienza" in Rome. He has a Master of Science in Electrical Engineering from the Polytechnic of New York. He has a consolidated experience in many important companies, as he began his professional career in 1990 in Telecom Italia, where he has had increasing responsibilities, including, from December 2004, the role of CEO of Telecontact. From 2007, he has worked for Vodafone, with various roles from Customer Operations and Sales, until he became CEO of Vodafone Gestioni SpA and Head of Direct Consumer Sales.
Between 2010 and 2018 he worked for Poste Italiane where he coordinated the development of the telecommunications network. As Manager for Technology Governance area he also coordinated the design of the Tier 4 Data Centre of Turin, as well as of the cloud infrastructure. In 2017, as Public Administration Sales Director, he was entrusted to develop a new service model for the Public Administration. He also gained a relevant international experience, managing the development of partnerships with foreign operators.
He was a member of the Board of Directors of Fondazione Vodafone (2009-2010) and of Consorzio Elis (2012-2016). In 2011 he was a member of the board of the founders of Fondazione Ugo Bordoni. He is passionate about music, and he graduated in Composition for Applied Music at the Conservatorio di Santa Cecilia in Rome. He has been in the board of the Accademia della Musica of Tarquinia.

This is formed of 3 members appointed by the Regional Council of Piedmont, one by the Assembly and one jointly by the Polytechnic and University of Turin.

This is formed of 3 members appointed by the Board of Directors, with the task of monitoring and ensuring compliance with the application of the "Model of Organisation, Management and Control" that CSI Piemonte has adopted following the requirements of Legislative Decree 231 / 2001 on "administrative responsibility" of Public Administrations.